An introduction to the ways of using your body to play Piano, avoiding injury, and strain. | taught by Daniel Roberts

5 Videos
3 PDFs
In this self study video course for healthy practice, you will learn simple effective ways , to practice for your concerts/auditions/exams without experiencing pain after, and ways to avoid future physical problems from tension that is often carried into a practice session unconsciously.

This course will start you on your journey to feeling more positive, calm, and excited about your performances, and being able to let go of the worries that often hinder your natural expression.

You'll learn the ways to prepare physically before every practice session.

As well you'll be given methods to practice in a calm and focused way, free from frustration and impatience.
This way you will be able to enjoy your practice sessions again, without resentment, and feeling like your in a vicious circle of no development.
The methods taught in this mini course, will help you to ´let go´of the need of getting everything perfect in a very short time, and you´ll trust yourself to let natural improvement happen.
Also you will learn the necessary steps when you start to notice any problems arise during your practice, how to safely prevent them and start again. from a natural relaxed state.
This will save you many hours again, of being frustrated with your practice, and not knowing the root of the problem, leading you to look forward to each practice session, knowing you have the means to make progress in your musical journey.
Performances that you have scheduled won´t seem like heavy burdens, as you can feel more prepared, and enjoy performing in the moment without stress from physical tension.
As a bonus you will get a practice Planner, that will help you use your time most productively in practicing pieces, that you would really love to perform.

The videos will be online forever, to study at your own pace.

Enrol today and start your journey towards practicing in a safe healthy, satisfying way.
Buy $11.00 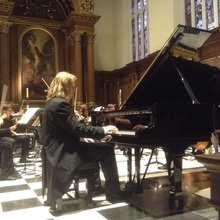 Since graduating from Leeds College of music, having studied with Helen Reid, Natalia Strelchenko, and continuing lessons with Peter Feuchtwanger, Daniel Roberts has performed around Europe and South America.

In September 2009, Daniel was invited by Natalia Strelchenko, to perform solo pieces by Bach and Ravel, as part of the Egersund Youth Chamber music festival, Norway.
Daniel has performed for the Beethoven Piano Society of Europe in the famous London church, St James Piccadilly, and also has performed with Duo partner Hannah Woolmer at London’s Foundling museum, Southwark Cathedral, and The Wales Millennium Centre in Cardiff.
In 2014 Daniel performed Beethoven’s ‘Emperor concerto’ with the University of Cambridge Philharmonic orchestra. Other performances performances with orchestra have included Beethoven’s 1st concerto, Chopin’s 1st Concerto, and Rachmaninov’s Rhapsody on a theme of Paganini, and 2nd Concerto.
In December 2013 Daniel performed in Brazil, at the Museum of modern art, Juiz De Fora. The recital included the South American Premier, of Peter Feuchtwanger’s ‘Variations on an Eastern Folk tune Book I’ and ‘Tariqa I.’ He returned in April 2014 to premier ‘Variations on an Eastern Folk tune Book II’.
Daniel gave his Debut recital at the Feuchtwangen International Piano festival, Germany, in April 2015, performing the festival’s premiere of Peter Feuchtwanger’s ‘Variations on an Eastern Folk tune’ Books I & II.
In December 2015 he performed Gershwin’s ‘Rhapsody in Blue’ with the Orchestra Sinfonica Mario Viera in Brazil.
In February 2016, Daniel gave recitals in London’s St Martin in the Fields, and Edinburgh Society of musicians, performing a varied program of popular pieces such as Mussorgsky’s ‘Pictures at an Exhibtion’ as well as Eastern inspired music composed by his late teacher Peter Feuchtwanger.
Future concerts include solo recitals in the UK and Brazil, concerto performances with the Woolmer Philharmonic orchestra, and Orchestra Sinfonica Mario Viera, as well as Chamber performances with Violinist Hannah Woolmer.
Daniel also teaches the approach to playing of Peter Feuchtwanger, using his exercises and philosophies.
We suggest moving this party over to a full size window.
You'll enjoy it way more.
Close
Go Fullscreen